“Childhood is my main theme. During the totalitarian regime it was one area that could be freely explored.” On display for the very first time in the UK at 12 Star Gallery is the work of Czech photographer Dagmar Hochová, overflowing with images of children adorning ruined buildings or gurning at the camera –uninhibited, exuberant and playful. Photographing them became Hochová’s calling card, but she also took exception to her reductive moniker as “the photographer of children”. The label elides her work’s implicit socio-political content and documentation of pivotal moments in the Czech Republic’s history.

Curated by Jiří Pátek and organised by the Czech Centre London, The Power of Sympathy presents a select number of Hochová’s vibrant photographs, depicting a time of great national upheaval and change. Under the constraints of a Communist government since 1948, the desire for the country’s liberalisation – as embodied in Alexander Dubček’s reforms – is shown through the events of the Prague Spring of 1968. The subsequent invasion of the “Warsaw Pact” armies the same year quashed any such hopes, leading to the intensification of pro-Soviet government and increasing censorship of the press. Twenty years later, the Velvet Revolution finally ushered in a process of democratisation and self-rule as the Communist government was ousted – changes echoed by other Eastern Bloc countries at the time.

Two girls on the bridge, 1959 by Dagmar Hochová, courtesy of the Moravian Gallery, Brno

One of the defining images of the show is Two on the Bridge (1959). An endearing distillation of childish vigor, it captures two young girls cockily facing the camera sporting gap-toothed grins, their liveliness conveyed by the photo’s tight cropping and angular lines. A timeless rendering of early youth, it is also tempting to see this as an instance of photographic sleight-of-hand – a veiled challenge to a regime silencing artistic freedom of expression. Antonin Dufek notes of the Communist coup in 1948 that the regime ‘required that “photographic workers” devote themselves exclusively to the promotion of communism and the new way of life.’ The seemingly apolitical content of these photographs, inevitable given the repressive edicts imposed by the state, is arguably a sublimated indictment of the regime; their flagrant expressiveness channeled through their inoffensive content. Two on the Bridge, in its boisterous, semi-confrontational way, might just be a two-finger salute to the people in power.

The exhibition is divided into two sections, with the first chronologically illustrating Czechoslovakia’s transition from Communist oppression to democratic government. Curator Pátek has managed an impressive feat here: selecting 17 from over 4000 potential images (held at the Moravian Gallery in Brno) to represent the overarching narrative of twenty years of Czechoslovakian history. You can almost see the movement of the times, the twists and turns of the country’s fortunes. Hochová’s work doesn’t privilege politics over people however: they are just different sides of the same coin. Václav Havel – Future Czech president, playwright and dissident – is photographed glancing deferentially at his wife Olga in one of many images Hochová took of ostracised artists, while the invasion of “Warsaw Pact” armies into Czechoslovakia is humanized in a shot of a man despondently watching a tank pass by from a tram window. As he looks out on the scene, the tank commander glances back a little uncertainly himself, and both from their different vantage points seem to acknowledge the absurdity of the situation.

The mobilization of resistance to the regime is shown in images of the Silent March through Prague in 1969, culminating in the return of the country to Czech control after 1989’s Velvet Revolution and the disbanding of the Communist Party. In the intervening decades a messy reality is elucidated – a tension between the “normalisation” of the regime and an allegiance to past ideals. Annual holidays and events such as Labour Day Parades and Spartakiad marches (a supplement to the Olympics) are depicted in which citizens were made to take part. These images, which imply acceptance of the Communist order, are balanced by the inclusion of Hochová’s photos of The Legionnaires. Unique among her contemporaries, she documented the WWI veterans’ trips to Lány cemetery, where they paid their respects to the president of the First Czechoslovak Republic. This was a bold move considering an act of allegiance to a previously democratic state would have been unfavourably viewed by the regime.

On the adjacent wall a political overview acquiesces to a more humanist approach, presenting a selection of photographs conveying the scope of Hochová’s thematic concerns. As well as charting everyday life under Communism, she documents those who, as Pátek phrases it, “did not fall easily into the spotless image of the developed socialist society.” This included an older population, those with learning disabilities, intellectuals and dissidents. A number of portraits convey the naturalism of Hochová’s approach, her gift in capturing unguarded moments: a soldier walking at ease down the street, or Czechoslovakian gymnast Věra Čáslavská (incidentally anti-regime) gracefully receiving flowers. A dauntlessly determined spirit is everywhere tangible, particularly in an image of an old woman traversing a barbed wire fence: the framing of a metal cross between two trees reinforcing the transgressive symbolism of this act in a wonderful evocation of defiance. 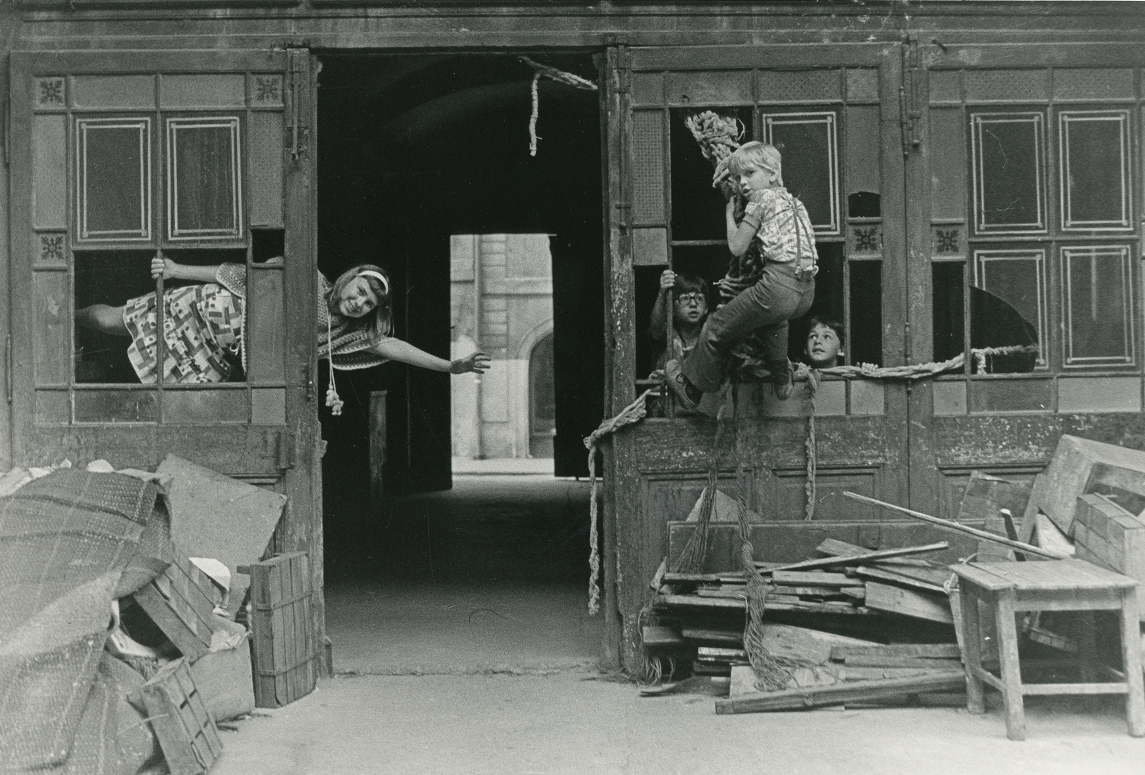 Key to the appeal of Hochová’s works is their unaffected warmth and compassion. Nuns provide guidance and affection to disabled children while nurses share smiles with the aging members of retirement homes. Even in the most difficult of circumstances Hochová refuses to indulge in defeatism, looking always for the light. Though only her joyful images of children were free to be published before the regime imploded in 1989, she was steadfast in her resolution to attend to the realities of life disavowed by the Communist Party. Intentional or otherwise, her ostensibly innocent images of children, revelling in all their youth and unharnessed energy, feel like the perfect riposte to the totalitarian government’s restrictions on its citizens’ freedom of expression.

Thanks to both Renata Clark and Jiří Pátek for their assistance.